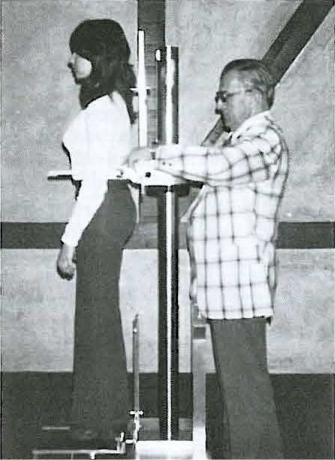 Miss Sherry Dickholtz of Chicago, a Palmer College of Chiropractic student being examined on the ANATOMETER by Dr. Ralph R. Gregory at the 1976 NUCCA Convention.

In April of 1976, U.S. patents were applied for on the ANATOMETER, an instrument that measures and records in terms of the orientation planes of motion the presence of, the location of  and the severity of the distortion-stress effects of C-1 subluxations on the human body, making possible thereby statistical analyses of reciprocal relationships between C-1 misalignments (determined by X-ray analysis) and such distortion­stress effects on the skeletal framework as directly result from the misalignment interferences of C-1 on the nervous system and its normal functioning. The ANATOMETER can demonstrate the distortion-stress effects of a C-1 subluxation on the spine by checking the malpositional relationships of key vertebral segments along the spine prior to and subsequent to C-1 correction, indicating thereby the corrections obtainable throughout the spine and thus reducing the need for repeated applications of X-radiation to the patient. The machine has movable elements which provide indications of corrections or displacements and has a pair of vertically movable platforms with horizontally adjustable foot placement indicators mounted thereon.

The ANATOMETER has several purposes and functions.  Among these is the determination of the absence or the degree of the presence of interference with nervous conduction at the spinal level of C-1 as expressed in terms of bodily distortion. It determines if an adjustment of C-1 is required. It measures the effectiveness of a C-1 adjustment immediately following such adjustment and the degree to which the adjustment is corrective; and, on succeeding checks, the length of time the correction remains stabilized. The ANATOMETER also measures the state of muscular and /or skeletal stress of the body and to what degree. It measures the degree of pelvic-girdle distortion into the lateral and transverse planes of motion so that relationships to the misalignments of C-1 subluxation into the lateral and transverse planes can be established and compared, an important function in researching the effects of C-1 subluxations on the body. Thus the ANATOMETER has a data-retrieval function.  The ANATOMETER predicts the onset of a C-1 subluxation and indicates changes in the misalignments of a C-1 subluxation indicative of the need for correction vector changes in the adjustment and a reevaluation of the subluxation listing.

There are several other functions which the ANATOMETER is capable of performing to one degree or another. It was invented primarily to test by measurement the basic hypothesis that C-1 subluxations are the most far-reaching and damaging subluxations in the spinal column because of their proximity to the caudal region of the brain stem, and to relate reciprocally each  misalignment factor of the C-1 subluxation, if possible, to its distortion effect on the body.

In very simple terms, the ANATOMETER is a measuring stick. For the first time, to our knowledge, in chiropractic and/or medical history a measuring system has been devised to demonstrate the harmful effects of a vertebral subluxation on the human body and to provide a means of relating those effects directly to a vertebral subluxation. Furthermore, the ANATOMETER has provided convincing proof of the neurological rationale that C-1 subluxations can and do cause imbalance between the inhibitory and the facilitatory mechanisms of the brain stem, which imbalance is responsible for spastic contracture in skeletal muscles.

Application for U.S. Letters Patent have been made by Mr. Peter Benesh and Dr. Ralph R. Gregory, both of Monroe, Michigan. Mr. Benesh and Dr. Gregory are co-inventors and co-patentees of the ANATOMETER, and Mr. Benesh is the manufacturer. Both have assigned their interests in the instrument to the National Upper Cervical Chiropractic Research Association, Inc., a Michigan Corporation, of which Dr. Gregory is president.

A separate application for a process patent on the ANATOMETER has been made by Dr. Gregory, inventor of the process. The law firm of Harness, Dickey, and Pierce of Birmingham, Michigan are the patent attorneys. Dr. Gregory has assigned his interest in the process patent to the National Upper Cervical Chiropractic Research Association, Inc.

The cost of the research project with the ANATOMETER is in excess of $100,000.00. The greater amount of this sum was supplied by Mr. Peter Benesh. All of us are indeed grateful for his generosity and his vision.

During the nearly five years of intense research, Professor Daniel C. Seemann of the University of Toledo served as statistician, research advisor, and counselor. His assistance in all areas of the research project was invaluable.