By UCM_admin Legacy, The Restoration Principle No Comments 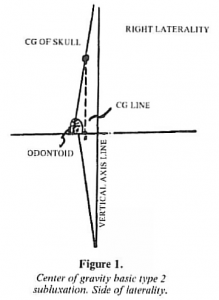 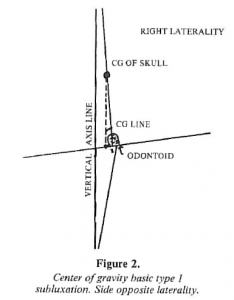 These hypotheses were basically supported with an analysis of I000 cases which showed that 68% of all posterior rotations are Type 1 subluxations and that about 75% of all Type 2, 3, 4 subluxations are anteriors.

The reader is probably wondering at this point what this has to do with predominant factors, but our knowledge about where the CG of the skull falls in relation to laterality and rotations are produced with regard to the long axis and short axis gives clues as to how the predominant excursions are produced.

For an example, recall that one of the hypotheses from the Gregory article (1969) states that with a Type 2 subluxation leg shortness would be ipsilateral. With more information on how subluxations are produced, an analysis of the biomechanics can be made. With the Type 2 subluxation, the CG of the skull falls on the same side of laterality in the frontal plane, the plane line is level and the rotation is anterior. This is true in about 75% of the Type 2 cases.

As to why Type 2’s are ipsilateral the answer is more complicated. It is felt that ipsilateral short legs are more detrimental neurologically, because the head turns on the atlas condyles causing foramen magnum pressure on the spinal cord.

Type 1’s tend to be contralateral, because of the biomechanical relationship mentioned above. As a result of this arrangement, it is thought the pressure caused by the subluxation is less detrimental neurologically than with the Type 2’s, 3’s and 4’s. There is less turning of the head on the atlas condyles and more of the atlas accounting for laterality, therefore less pressure caused by the foramen magnum.

The long axis and short axis theory on how rotations are produced presents some possibilities on why legs will shorten either ipsilateral or contralateral. It was hypothesized that if the CG of the skull falls to the side opposite laterality the atlas would tend to pivot at the condyle where the CG falls. In this case, it would be the long axis and would tend to produce posterior rotations.

If the CG fell on the same side as laterality, the condyle under the CG of the skull would be the pivot point for the atlas. This would be the short axis and tend to produce anterior rotations.

The import of knowing whether a subluxation is a short axis or long axis will help in determining where the pressure from the subluxation is located on the spinal cord. For an example, with the short axis, the atlas seems to impinge on the spinal cord to a greater degree than the long axis. The direction of the impingement more from an anterior position whereas the impingement for the long axis is more from a posterior position. This analysis although theoretical, may in the future, give insight as to why posterior rotations cause different pressures on the spinal cord than anterior rotations.

A TESTING OF SOME OF ORIGINAL HYPOTHESES

With more information as to how the predominant factor works, a testing of some of the earlier hypotheses as proposed by Gregory were made.

It became evident in the above analysis there were too many variables to control for in this type of analysis. So a strategy was made for testing the relationship between laterality and rotation to determine short leg tendency. The strategy was to test two hypotheses that concern laterality and rotation. Basically, the hypotheses state: “If laterality is the predominant factor, leg shortness will be found on the side opposite to laterality and if rotation is the predominant factor, leg shortness will be found on the same side as laterality. The plan was to hold either of the variables constant while attempting to predict leg shortness. For an example, while using the computer it is possible to isolate all listings that have a rotation of one. It is possible then to examine the effects of laterality with rotation being held constant. The below conditions were examined holding one or more variables held constant.

THE EFFECTS OF LATERALITY WITH ROTATION HELD CONSTANT

The below cases were examined with rotation held constant at one degree.

File 6726 is an example which supports the hypothesis: If laterality is the predominant factor, the leg will be short on the opposite side of laterality. The prediction is supported for several reasons: the spinous is = to laterality, laterality is greater than the rotation and subluxation type is 2.

File 6789 supports the hypothesis but the listing is different than above. The spinous is not = laterality and rotation is posterior.

File 6739 does not support the hypothesis. In this case the leg shortness is ipsilateral yet laterality is greater than rotation. The spinous is smaller than Iaterality. It was found in analyzing similar cases where the prediction was not supported the spinous was not = to Iaterality. The type of subluxation was a Type I.

The last case study of this sequence illustrates a situation where laterality and rotation are equal as to the excursion into each plane. The problem then is how do you predict which is the predominant factor?

File 6721 indicates that laterality and rotation are equal as to the excursion into each plane. Laterality and the spinous are equal. So what might be the deciding factor in why the leg shortness is contralateral? What makes the prediction more difficult is that the type subluxation is a Type 2. The head turning on the condyles should make the prediction ipsilateral. What we do not know in the listing is whether the plane line is involved, i.e., whether the skull has turned on the atlas condyles or the laterality is the result of the atlas moving into the left frontal plane. Whatever the analysis, the conclusion would have to be that the subluxation was a contralateral pressure.

THE EFFECTS OF ROTATION WITH LATERALITY HELD CONSTANT

The below cases were examined with laterality held constant at one degree. The prediction should be if rotation is the predominant factor, then leg shortness should be ipsilateral.

File 6729 is an example where the prediction for ipsilaterality is not supported. Leg shortness is contralateral. It appears that rotation is the predominant factor.  But note that the spinous is 0 degrees. Evidently with this case, the effects of the spinous are enough to offset the effects of the anterior rotation.

File 6666 does not support the prediction even though there is an anterior rotation of 6 degrees and a laterality of 1 degree. There are two possibilities as to why this case is contralateral. Probably the biggest factor is the spinous is not equal to laterality (8 degrees) which perhaps offsets the effects of the rotation. The other factor is that since the case is a Type 1 subluxation, the skull laterality is due to a shift in the atlas rather than the skull turning on the atlas condyles.

File 6721 is difficult to predict because the ratio between rotation and laterality is equal. In this case the leg shortness is contralateral. This is surprising because the case is a Type 2 subluxation. The only clue is the plane line might be high.

The final analysis will examine Type 3 subluxations. The lower angle may be another variable that needs to be considered with predicting leg shortness. It was also felt that the characteristics between Type 3’s and Type 2’s which are similar would help in understanding one of the original hypotheses which states that Type 2 subluxations will tend to be ipsilateral.

File 6598 supports the prediction that leg shortness should be ipsilateral. The first factor to note would be the amount of laterality, in this case 4 degrees. The plane line should be zero, so it can be assumed the skull is turning on the atlas condyles. lf the rotation was anterior it would make the prediction easier, but evidently the .5 degrees posterior does not affect the pressure.

File 6563 does not support the hypothesis. The leg is contralateral and this listing is difficult to explain. The large laterality and the anterior rotation would indicate leg shortness should be ipsilateral. There are two clues which makes leg shortness in this case, contralateral. The spinous is not = to laterality and it is not known if there might be a plane line that is not level.

File 6565 does not support the hypothesis. Leg shortness is contralateral. There may be two factors which influence the predominant factor. There is a posterior rotation which may reduce the amount of pressure and again the spinous is not = to laterality. It is not known what the plane line is doing which would help the prediction.

Holding the lower angle constant does not seem to improve the prediction, which suggests there might be another variable involved with the hypothesis. The variables that leap out are that we need to know more about the plane line and more about the spinous.  In every case that was examined of a Type 3 subluxation the spinous was not equal to laterality. This characteristic should be studied further.

What is interesting about the spinous involvement as to the predominant excursion is that Gregory noted in one of the original hypotheses (1969) “that the odontoid and spinous are capable of decreasing or increasing the influence of laterality on the neurological component.” Further investigation of this influence is warranted.

Being able to determine the amount will give a clue to which leg will shorten. If there is a significant portion of laterality that is due to the skull turning, the prediction will be the leg will be ipsilateral.

Some other hypotheses have been gathered from this research. No speculation will be given as to why the pattern exists just that they were noted and will be studied further.

The reader may come to the conclusion that the original hypotheses as generated by the Gregory article have not been supported. And a superficial view of the data would support this notion. Yet as we delve into the subtleties of the variables which were analyzed in this article it is the writer’s belief the hypotheses will basically be valid. Future research will bear this out.

Research about the predominant theory is a significant first step. To be able to predict leg shortness as the result of knowing the biomechanics of the subluxation is known by very few.